The code provided below was written to learn the basics of game programming (using the Open Source Graphics Engine “Irrlicht3D”, the 3D modeller Milkshape3D and other tools).

This is a demo only. You can’t actually participate – just watch the computer players acting. Below, the executables and source code are presented for download. Just in case you want to take a look – or even have a good laugh about my crappy programming style.

You won’t need to know the rules (as this is an automated demo). Just if you are interested.

Chase-Me is played by 4 players, using a dice. One player after the other (clockwise rotation) rolls the dice and moves one of his/her tokens accordingly (if possible).

Each player gets 4 tokens. The game’s goal is to bring all tokens from the start position (where they reside in the beginning) to the home zone (4 fields in a row, painted with the players’ color). The way to there is via 40 “walk-fields”. Walking directon is clockwise only. No walking backwards. Only the full number shown by the dice may be moved.

A token may only be moved out of start position with a dice result of 6. Then, it must do so, though. It moves to the “init position” then, waiting for the next move. A token can not move out if another item of this very player is still occupying the “init position”. Move another token instead.

Players can hit other players’ tokens, sending them back to start position. For doing so, an own item must end its move at the position of a foreign item. Bypassing does not have any effects.

The home positions of each player are not accessible by other players.

As soon as one player has lined up all of his/her tokens in the home zone, the game is over and the winner is set.

Kudos to Josef Friedrich Schmidt, who invented “mensch aergere dich nicht” during the winter of 1907/1908. 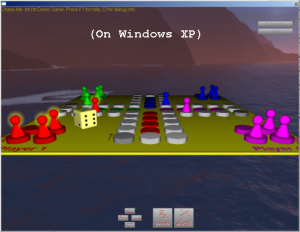 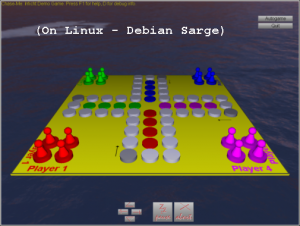