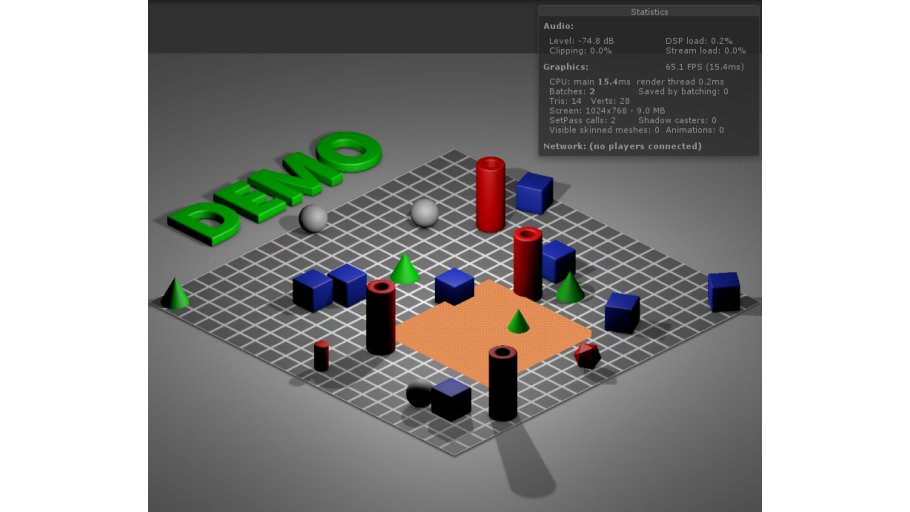 Out of interest, I searched the net on how those people from Obsidian made that great graphics for Pillars of Eternity.
According to this (and other sources), they compose the backgrounds in a 3D modelling program, then create a pre-rendered picture with depth information export, then combine all this (and more) in Unity3D with ‘real’ 3D objects (avatars and alike). That way, they don’t need to import large 3D scenes (with many objects to render) into the game engine, thus reducing the overall load.

Now, I wondered how this approach could work using my currently preferred tool pipeline, which consists of C4D and Unity3D. Below, I’m elaborating on the different steps it took to create a “demo” that finally shows the concept (all source files are also available for download).

Please see the screenshot above. Lots of objects in there, right? Uhm, no. Actually, there are only two 3D objects present in the scene: The orange flat cube (which can be moved around), and a quad that holds the pre-rendered background image with all those tubes and cones and whatnot.
As you can see, the ‘perspective is still ok’, though – well, as good as it can get for an isometric view 😉 . Some parts of the orange thingy are hidden by ‘objects in sightline’, while the orange cube itself covers parts of the scene that lie underneath it. That effect was achieved by using C4D’s PositionPass export feature and a custom shader in Unity.

The rough work flow can also be seen here:

To be able to ‘sync’ the pre-render picture and data with objects in real 3D later, some boundaries must be considered. Here is what I did:

When rendering the scene in C4D (Shift-R), two files should now be created. The pre-render picture (*.png), and the position pass output (*.exr). The latter one contains information about each pixel’s position in space (i.e., what 3D world position of the scene this pixel was generated from).

Btw(1): Information about the OpenEXR format can be found here: http://www.openexr.com/
Btw(2): For viewing such files, I used RenderDoc (https://github.com/baldurk/renderdoc).

Later, in Unity, the position pass data will be stored to a RGBFloat texture and be used in the custom shader.
As I had problems when directly importing the *.exr into Unity, I used a small tool to convert the data into *.txt and *.bin (only one type is needed later). Check here for the tool.
Note that position data is normalized to [0..1] before storing it to the texture (and needs to be re-scaled again later in the shader).

Set Up and Adjust the Scene in Unity

In Unity, we need to

The custom depth shader takes position information from the RGBFloat texture (formerly known as ‘the converted EXR file’) and calculates the distance of a background-pre-rendered pixel’s former world position (oh my) to the current camera (CAM2). It also calculates the distance of the current pixel in work (originating e.g. from our real 3D avatar) to CAM2. If the latter one is nearer than the ‘background pixel’, it will be drawn (discarded otherwise). This way, depth information of the C4D export is considered when drawing the scene as a combination of background picture and real 3D objects.

(The demo.exe: A red-colored swordsman in a mini dungeon)