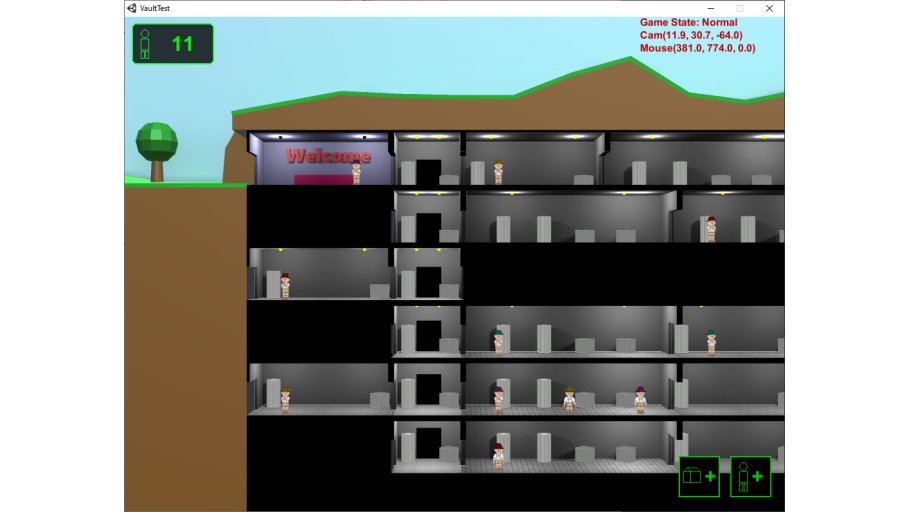 Ever played Fallout Shelter? Well, you should, IMHO. It is an addictive little base building game (available on mobile and PC/XBox) – with cute graphics on top.

As FS was done with Unity, I thought I could (at least, partially) re-create the game play, getting some insights how they probably did it. The outcome is (yet another) test case, this time called FalloutShelter’ish. The main focus was set to room building and dweller movement.

FalloutShelter’ish was planned to have these minimum features (and actually got those in the end, more or less):

As shown below, I tried to split up the game mechanics into detailed states, avoiding sub-states. This approach bears some issues, though. E.g., the “Room Info” window is activated when a room has been selected (State “SelRoom”). This disables Camera Drag, as that was defined as another state. In the end, not the overall best design decision.

Internally, the building area consists of a 10×10 grid. Each grid can be occupied by a room and link to other grids. The “vault entrance” (where new avatars come in) is at the upper left corner (fixed position). To ease things up, each grid can hold only one avatar, and rooms can be built of grid size 1, 2, 3 only.
To use easy checks on room removal (“room is linked to more than one other room”), the following building rules were defined.

As it turned out, this was not sufficient, though. It is still possible to build a base with circular references. Then, some rooms can’t be deleted. More detailed checks on room removal would need to be implemented in order to fix that (not done for this test).

Avatar movement is done by a click&wait&drag&drop operation (drag a Dweller onto another room). Internally, a waypoint array of Vec3 is being calculated “on drop” and submitted to the entity for pathed walking.
For pathfinding, I used a stripped-down A* variant, running in the main thread. As avatar numbers and positions match the underlying grid, the pathfinding is simply using grid elements.

Actually, the a.m. waypoint array could be converted into a more general “action system”, where different actions would be calculated at path creation time. Like, “walk to…”, “activate elevator lights…”, etc. This way, an action list would be given to each avatar, which takes then care about trigger time and execution. Actually, I’d prefer this over lots of independent volume triggers in the scene.

These are some (weird) game ideas – trying to combine the UI from above with other existing concepts.