Recently, I played with PnP TerrainCreator (www.pnp-terraincreator.com). It worked very well, and the documentation and plug-in reference is very detailed. So, I created a plugin for exporting to DXStudio’s mesh format ‘*dxmesh’. It uses Worldweaver’s DXMeshAPI 1.0.1 and is mainly based on the plugin reference code by the TerrainCreator people.

This exporter is adapting the programming layout of the pnpTC plugin demos (and re-using quite a lot of their code). Creating quads from heightmap bits, exporting textures, lightmaps and reducing polygons is in. Plus some additional features that might be helpful for using the meshes with DXStudio. There is a chance the plugin will be added to the official pnpTC distribution some time in future. Until this might happen, please download from this site.

These links to pnpTC wiki entries: Graphics and Game Engines and DXStudio. 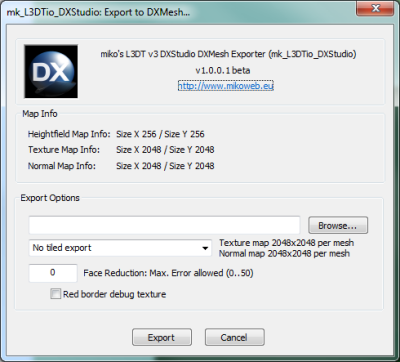 The current plugin version works with L3DT version 11.08 and up.

– One single mesh export or tiled terrain (“mosaic”)
– Automatic export of vertex normals for the mesh (using L3DT-internal calculation routines)
– Export mesh with texture maps (if present in L3DT)
– Export with “tangent space” normal maps (if present in L3DT; this is a L3DT Pro feature)
– Export with or without face count reduction (using L3DT-internal calculation routines)
– Automatic creation of a supporting *.xml file with tile positions and informations
– Automatic export of a DXStudio demo doc to load and display the new terrain instantly